Recently I was introduced to an interesting TED talk, by Jackson Katz. In his talk (which you can find here) he makes quite a few valid, and interesting points. But, for me, the most interesting thing he talks about is what I’m going to call the Bystander Protocol. Katz says that:

A bystander is defined as anybody who is not a perpetrator or a victim in a given situation, so in other words friends, teammates, colleagues, coworkers, family members, those of us who are not directly involved in a dyad of abuse, but we are embedded in social, family, work, school, and other peer culture relationships with people who might be in that situation.

Katz is specifically speaking about abuse in his talk. I think too often we hear or read “abuse” and understand it to mean physical, sexual, verbal or psychological abuse. While those forms of abuse must be addressed, they are blessedly not the most common forms of abuse. I don’t mean to downplay, in any way, these forms of abuse. Indeed, I think there’s a more pervasive form of abuse that is particularly prevalent in the technology sector. By ignorance or malice (honestly, I don’t care which) I believe we as a society tend to use language –metaphors, words and idioms– that cull our imaginations and those of our listeners and readers. Sexist language is, I believe, especially prevalent in the technology sector.

I’m sure we can all easily find examples of overt sexism in the technology sector. Earlier this year, this happened: 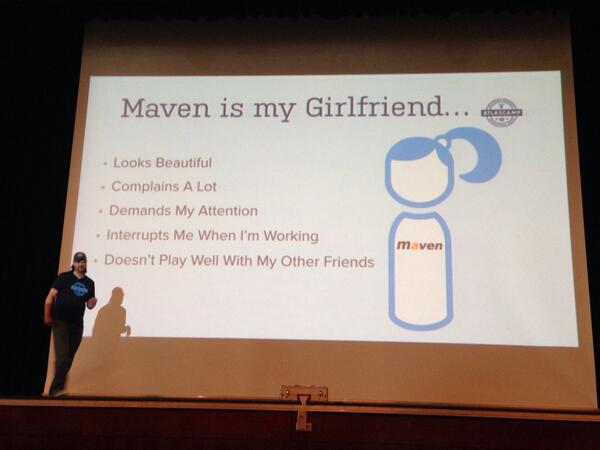 Sadly this slide praises only the physical attributes of the metaphor (looks beautiful) and denigrates the personality and intellectual attributes. Thankfully, within a few short hours there was a prompt and complete apology. But, as one commentator pointed out, the fact that no one thought to talk the speaker out of this metaphor belies the underlying problem: No one caught it ahead of time because we’re not self-aware of the issues enough to catch them.

More than overt sexism in language, I feel like we use gendered pronouns and gendered examples in our talks, blog posts and even example code. I imagine it’s hard to hear “Women in Technology YAY!” from corporations, and read “Your developer can do X if he chooses.” At the very least it’s inconsiderate. Again, I doubt many people regardless of gender intentionally choose to be exclusive with their pronouns and language; but I do think it’s pervasive.

As we approach Dreamforce ’14 I’m reminded of our industry’s history with sexism and struck by the simplicity of Katz’s action point:

(Emphasis mine). I think the answer lies in the Bystander Protocol. As Bystanders, we’re present and able to speak truth to power gently and positively. I believe we, as Dreamforce Attendees, can and should expect our speakers (myself included) to not only avoid overt sexism, but exclusive language in general. I don’t imagine this should work in an aggressive, confrontational manner. When presented with gender-specific speech, or even language that presumes gender norms, we can (and should) politely, calmly ask the speaker to consider other language.

I believe we should pledge to actively participate in conversations as Bystanders; using neither sexist and exclusive language nor permitting such speech to go unchallenged. Let’s actively strive towards a culture of accountability and acceptance by doing something. None of us could hope to change the whole of the tech sector’s misogynistic culture by ourselves. No one can do it alone, but we can’t stand by in silence. As Bystanders at the world’s largest cloud computing conference we have the opportunity and responsibility to do that something by speaking out whenever we find hateful or even careless speech.

In the end, what will hurt the most is not the words of our enemies but the silence of our friends. ~ Martin Luther King Jr.

I want to challenge you my fellow speakers and attendees to Dreamforce ’14 to Pledge to do just that. Tweet with the hashtag #df14Bystander to take the pledge to speak out when needed, to politely ask questions of leaders and speakers who use exclusive language, to report overt sexist language, and to avoid the use of such speech yourself. Use “developers”, “devs”, “admins”, “we”, or “they” instead of “him” or “her” in your talks. Lets make this the tech conference where Women in Technology isn’t about the latest sexist faux-paux, but how women are presumed equal and capable. Wouldn’t that be a news blurb for @Salesforce to press release?